A good friend of mine is somewhat infamous in the Italian skiing resorts of Sella Nevea and Tarvisio. On the occasion of our first skiing trip he managed to cause carnage in both destinations and achieved the unique distinction of causing an emergency stop on every lift he attempted to use! He eventually mastered the art of mounting and dismounting chairlifts, drag lifts and carpet lifts and so I thought all would be well on our return to the region over the festive season but I was wrong!

The issue here was his decision to take up snowboarding. Having mastered the use of the infrastructure whilst on skis there was a whole new learning curve with the board and things didn’t go well from the start. Having had issues with the carpet lift in Tarvisio he was then presented with the challenge of the chair lift in Sella Nevea and this proved to be a step too far for a novice. Every attempt to dismount resulted in an unseemly crash and the inevitable lift stoppage and even the assistance of a seasoned skier in the shape of my partner didn’t seem to help. Then things took a distinct turn for the worse for me as my partner disappeared down the mountain leaving me to ride the lift with my friend.

What’s the Worse that Could Happen? 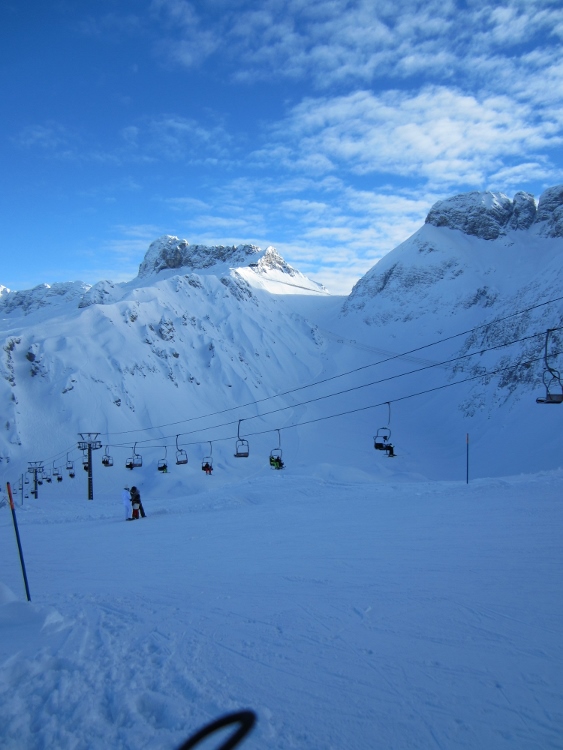 I asked myself how bad it could possibly be. If my friend fell over I could still ski clear of the lift myself and avoid the carnage and so I was stupid enough to take my place on the lift. Everything was going well as we serenely ascended the mountain but as the station came into view I realised that my friend’s snowboard had swung sideways and was underneath my feet. He seemed incapable of straightening his equipment and so as the dismount approached I was unable to move.

As we arrived at the point of no return I was still unable to move and we quickly found ourselves in mid-air beyond the station. There was nothing for it but to jump and so we took the leap of faith but my friend immediately fell over. His board was under my skies and so he took me with him and we ended up in a tangled mess on the floor. My knee smashed into his board which hurt quite a lot and I looked up to see a lift operator in the middle of a major sense of humour failure shaking his head in disgust. It took some time to untangle the mess of skis, snowboard and poles and we must have been a ridiculous sight. I felt like I was in a scene from a sit com and my cheeks were burning.

Thankfully we both emerged from the station with our limbs intact, if not our pride, although a subsequent inspection of my knee in the glass revealed a cut and an unpleasant bruise. My friend spent the rest of the holiday falling off the chairlift and to cap it all my partner, who was the only proficient skier in our group, broke his leg trying to avoid another inept snowboarder on the floor! We are now going to have to try a different resort on our next trip as we are no doubt blacklisted in Northern Italy!